About the Haiti Philatelic Society

Where the fun of collecting Haiti is found! 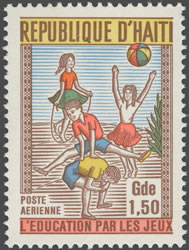 The Haiti Philatelic Society is dedicated to the dissemination of knowledge and the promotion of research of the stamps and postal history of Haiti.

The Society itself began in 1975, at the initiative of Reginald Gagneron, when a few collectors of the stamps of Haiti were asked if they would be interested in starting a study group. Within a year there were 25 members and a decision was made to formally organize a society. Officers were elected and the Haiti Philatelic Society began publishing a quarterly bulletin, Haiti Philately. Editors of HP have been: Reginald Gagneron (1976); Peter C. Jeannopoulos 1977-1980, 2017-2019); Polly Van Dyke (1981-1984); Dr. Gerald L. Boarino (1985-1998); Barbara Levine (1999-2017) and Wolfgang Windel (2019-present).

A Constitution and By-Laws provide the framework of operation for the society. All members are furnished a copy upon request.

Membership, which numbers approximately 100, is composed of collectors of all degrees of sophistication, from beginners to advanced specialists. Seventy are from the United States and the rest from Argentina, Australia, Canada, the Dominican Republic, France, Germany, Haiti, Holland, the Commonwealth of Puerto Rico, Sweden, the United Kingdom, and other nations.